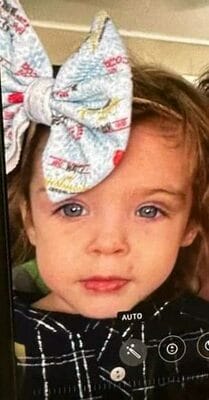 Services for Athena Alexandria Brownfield, 4, of Cyril, Oklahoma, will be held at 2 p.m. Wednesday, January 25, 2023, in The Stride Bank Center in Enid with Senator Roger Thompson officiating. Services are under the kind guidance of the Amy Stittsworth Funeral Service and Cremation Directors.

Athena was born on September 6, 2018, in Lawton, Oklahoma, the daughter of Wesley Robert Brownfield and Jasmin Adina Kay Faircloth Brownfield, and passed from this earth on December 25, 2022. She was raised in Nebraska and later in Oklahoma. Athena loved to color and Baby Shark. She and her sister were close “joined at the hip.” Athena enjoyed playing dress-up. Her favorite color was purple.

Survivors include her mother, Jasmin of Stillwater, father, Wesley of Apache, Oklahoma; a sister, Adina of Cyril, grandparents on both sides and aunts and uncles.

To send flowers to the family or plant a tree in memory of Athena Alexandria Brownfield, visit the funeral service online.

On Wednesday, January 25, 2023, the funeral service for Athena Brownfield of Cyril will be held at the Stride Bank Center in Enid, Oklahoma at 2 p.m. There are so many people and organizations involved in the funeral service. The events surrounding the untimely death of this little 4-year-old girl are heartbreaking and she deserves to be remembered in the correct way and with dignity. Because this is not about any other person or organization beside Athena, no comment from organizers will be stated. This is about the great people of Oklahoma giving respect to a little girl.

Any further information regarding the funeral should be directed to Public Information Liaison for the funeral service, Eric Foster at eric.fosterPIO@gmail.com