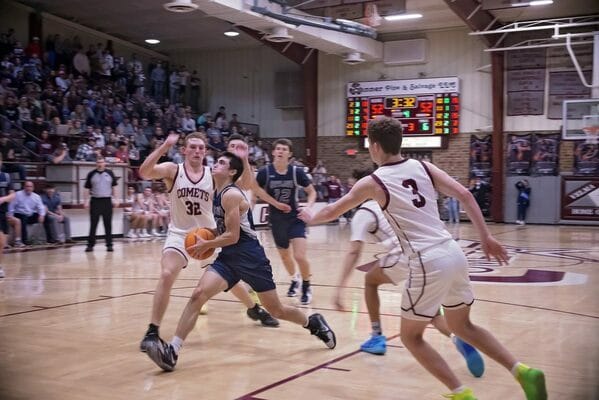 Marlow’s Blayd Harris goes for the score during the 92nd annual Stephens County Tournament, Saturday at the Velma-Alma gym, against V-A. Harris was awarded the Hustle Award during the finals awards ceremony, following the Outlaws winning the overall championship title. Photo by Toni Hopper/The Marlow Review 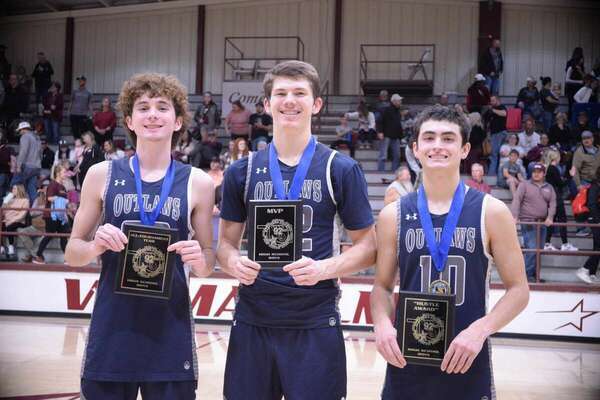 Marlow’s Parker Boyles, Avrey Payne and Blayd Harris show off their medals and plaques earned during the 92nd annual Stephens County Tournament, Saturday at the Velma-Alma gym. Between the three players, they scored 44 total points in the final game, which the Outlaws won, 58-55 after it went into overtime against Velma-Alma. Boyles was named to the All-Tournament Team, Payne received the MVP award, and Harris received the Hustle Award. Outlaws Head Coach Kirk Harris also gave medals to the players. Photo by Toni Hopper/The Marlow Review 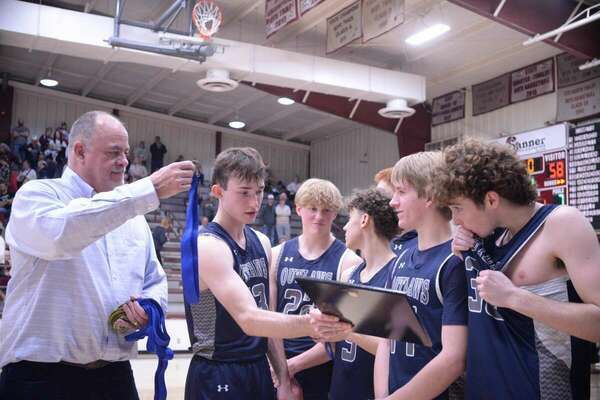 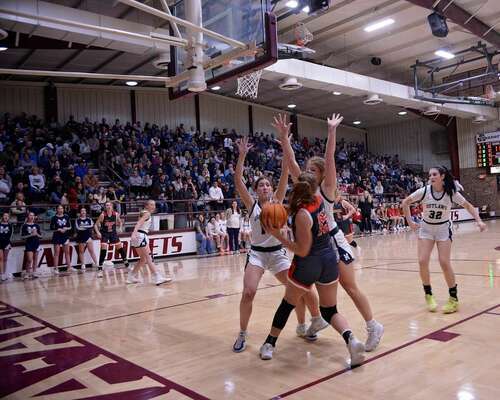 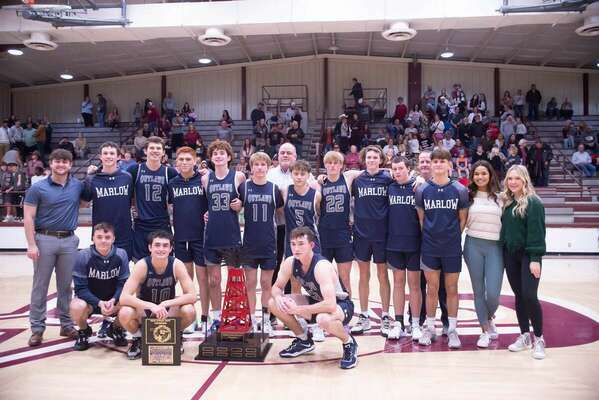 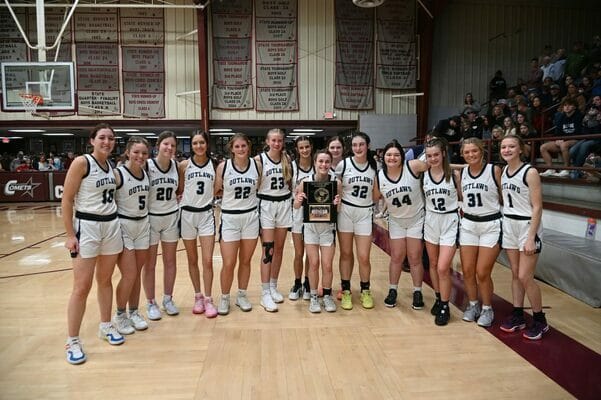 If you attended the championship games Saturday at Velma-Alma for the Stephens County Tournament, then you know the excitement that had everyone either on the edge of their seats or standing up.

Marlow’s Lady Outlaws battled Comanche’s Lady Indians in the final game, and several times it appeared Marlow was going to walk away victorious. Unfortunately, the game went to Comanche with a 38-30 win.

In the boys’ game against Velma-Alma, it was fast-paced and at the last second of the fourth quarter, it was a 52-52 tie, putting another four minutes on the clock. It paid off for the Outlaws who won 58-55, but not without hard work. The final 7 points in that overtime play were made by sophomore Kaden Harris #11.

“I am pleased with our performance last week in the Stephens County Tournament,” said Head Coach Kirk Harris. “We beat a very scrappy Comanche team in the semifinal game and were able to hold them to 29 points. I thought our defense was great in that game. In the finals versus Velma-Alma we held on for a tough hard-fought win.”

“Velma shot the ball extremely well from the 3-point range and made us work on the offensive end. Every time I thought we might pull away they continued to fight back in it,” Coach Harris said. “I thought we played a really solid game except for our late game execution down the stretch. We have to clean up some mistakes and make our free throws if we want to make a run in the playoffs.”

Harris noted that two big conference games were set for this week. Snow cancelled the Tuesday game against Lexington and the varsity team will play at 5 p.m. Saturday at Lexington for the make-up game. Friday, the Outlaws will play at home against Lindsay.

“That will go a long way toward our playoff seeding. We really appreciate all of the fan support at the county tournament this past week.”

Earning a spot on the All-Tournament Team for the Lady Outlaws were Allye Haile, Kently Davis and Whitney Wade, and for the boys, Parker Boyles. Blayd Harris received the Hustle Award and Avrey Payne was named Tournament MVP.

Velma-Alma’s Rylee McLain was top scorer for her team with 19 points.

Outlaws vs Velma-Alma Comets, with the Outlaws grabbing the championship title, 58-55, Saturday, Jan.21

Editor's Note: Many of the photos from this event were published in this week's paper, Jan. 26, 2023, but unfortunately, space limitations prevented the story and results from being published. We will be publishing a gallery of images in the near future here on our website.